Study, homework, read, study, class, get up and do it all over again. That’s been my life. All work and no play makes Lynn a very dull girl—and that's been my thinking lately.

I attended the funeral mass for Uncle Bob—Dad’s brother-in-law. Uncle Bob’s oldest son got up to say a few words. A beautiful tribute. I had rummaged through my purse for my pen and notebook when my cousin said that his dad said something like, “When you stop playing, that’s when you become an old man.” Uncle Bob was 92, and even though I didn’t really know him other than what I've heard—he played right to the end.

Hearing this made me realize that I’m not playing at all. Although I've recently met with some friends for dinner. I also meet my critique pals every other week. There are a few other things I allow myself since I've been in school, but daily? I don’t play daily.

That made me think, what constitutes play? Enjoying what you’re doing? Yes? I mean, if you’re having fun, even if it’s so called work, then to me you’re playing.

I journal every morning—which I love and enjoy. Maybe I am playing every day.

If programming weren’t so frustrating and confusing to me most of the time, I might even consider that play. But not so much, yet.

That made me think of something else. (Oh, I can hear my husband, son and stepson now… oh here she goes… they're the ones who give me the most trouble about running my mouth) I suppose my chatting can be like a program that has an infinite loop – ha – I made an analogy with programming. Not surprising, I dream in code.

We had a mid-term final. This class is about an hour and a half long. After what seemed like ten minutes, some genius gets up because he’s finished. I tried not to panic. I was probably on question 3 (of 25). I finished after using the entire class time. I’ll be lucky if half are correct… yeah, and it was open book. Go figure.

Okay, back to my point. (Yes… an infinite loop.)

After the exam, I was feeling dumb again. How’d that kid answer all of those questions so quickly? Who knows really, and it’s not right for me to compare. Maybe he grew up with a computer in his mouth. Maybe that’s all he does in his spare time. I thought, put him in a kitchen next to me and we’ll see who’s the genius. He’ll still be breaking eggs while my soufflé is baking in the oven. Okay, not really because I don’t do soufflés, but most anything else. But that doesn’t mean geek genius is dumb… he’s just not as experienced in the kitchen. And it doesn’t mean I’m smarter either... just more experienced as a cook.

So that’s my point. None of us are dumb. Some of us apply ourselves more than others in certain things, and some of us have more experience in certain subjects than others. That’s what makes us all so unique and interesting.

Uncle Bob, I’m glad your son shared your words of wisdom to play.

Speaking of playing, take a look at Lavender Dreams and see what she’s been playing with…
Posted by Lynn at 5:26 PM 11 comments:

I could have used the piece of advice that Suzanne shared with me the other night when I was getting ready for the Camp Wyman Gala.

As always, I let doubts and insecurities slip in while getting ready, when I know darn well it makes no difference AT ALL, really. So Suzanne said, “Here’s a piece of advice Mom told me when I was a teenager fussing around preparing for a date. ‘Suzanne, get ready the best you can, then forget about it, and focus on everyone else.’”

Such words of wisdom. How many times could those words have saved me from useless worry and anxiety?

I can apply this advice in many areas, not just getting ready for an event. Whenever I’m muddled in my own self-delusions of pity or pain, I have a choice to redirect that and focus on someone else. I will remind myself of this when I slip into that black hole, to remember: I have a choice. What do I want to pay attention to?

It's Christmas in March!

Maybe you missed it during the holidays since we're all so busy during that time of year, but don't miss it now because you can have a Christmas gift FREE. 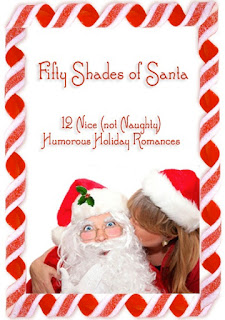 Fifty Shades of Santa by Welkin Press (Patricia B. Smith, editor) will be free as an ebook from March 1st (today, Friday) until March 5th (Tuesday). You can get your free copy here:

http://amzn.to/W9501h
Tell your friends, your relatives, your co-workers, your neighbors, your enemies (oh wait, none of you have those, do you?), tell anyone you know. I mean, what do you have to lose, but a little bit of your time? And what do you have to gain? Some really nice (not naughty) romance stories. Hey, and I'm in there!

Back in December, I crammed in one more thing during the busy holiday season and did a reading for my story, "Mistletoe." You can check out my blog that boosts about the event. It's too bad you missed it because I gave away some cute home-made ornaments (and chocolate!). But tell you what, if you get your free copy and send me an email with your address, I'll mail you an ornament that you can adorn your 2013 Christmas tree. Now, that's two gifts in one.  I only have so many ornaments, so hurry. My email address: Lober13(at)gmail(dot)com and if you would, put in the subject line: Ornament.