Lesson One in Cooking: Fried Chicken, Part One

I'm late in posting this (and each lesson will be weeks behind the actual lesson), but here is the first one...

You may have read about the Grand Tea Party – well, these two granddaughters also decided they’d like me to teach them how to cook, so this summer, every week (almost) we will be having cooking lessons.

I told them they’d need to decide what they want to cook. A few days before the first lesson, they called. “Grandma, we don’t know what to make. Can you give us some suggestions?” I was thinking, welcome to my world. This seems to be the universal problem of those who cook – what to make. I rattled off, “Meatloaf, fried chicken, roast—”
And before I could get in another word, they both shouted, “Fried chicken!”
I said, “Okay, fried chicken it is.”

We agreed that I’d pick them up on a Sunday afternoon, we’d grocery shop for what we’d need, they’d spend the night, sleep in on Monday and once up, we’d start cooking.

I forgot how 12 and 13 year olds like to be entertained, so I made a mental note to have a craft or game to do the next time I picked them up for Sunday evening.

“Can we make dessert too?”

They wanted to make strawberry shortcake. We made our list and headed to the store. Ah, how quickly it fades what extras end up in the grocery cart when you have people with you shopping. I wanted to teach them about budgets, but… we clearly exceeded ours this round.

I was a little disappointed that the big ole fancy pants Schnucks was out of corn on the cob. Seriously? We settled for frozen.

We came home, put everything away, fixed a quick dinner with Grandpa and then headed to Fritz’s for dessert.

Princess Flame and I were ready to go to bed by 9:30, but Ms. Princess Frost was not chilled enough. “It’s summer vacation!” We propped our eyelids up until sometime after 11, but who knows what time we actually drifted off to dreamland. 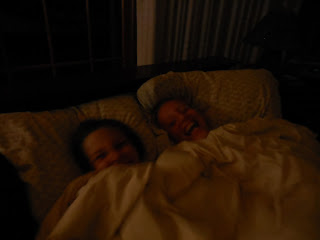 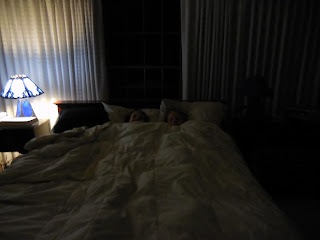 Here they are in the aprons that I sewed for them. They each received a box with some goodies. You’ll see more in the next blog. 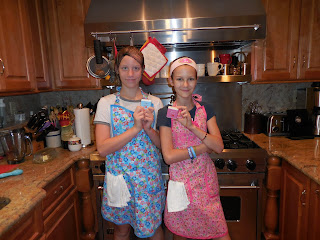 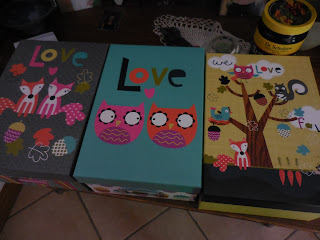 My friend, Tina asked if I’d like to volunteer by driving some college students to a few places… they’re cycling from Austin, Texas (hence, the name Texas 4000) to Anchorage, Alaska and had a stopover in St. Louis. The cyclists are students from UT (University of Texas). Check out Texas4000.org for more info and I guarantee you will be impressed.

I was clueless as I arrived at the Maplewood Richmond Heights High School that housed these students during their stay in St. Louis. They split the students among the six of us volunteer drivers. Between Paige and myself, who were going to Cardinal Glennon Hospital, we had: Alex, Zoe, Abigail, Blake, Joey, Dan, and Tuan.

We started out at St. Louis Bread Co., and while in line, an elderly couple saw the back of their shirts (Fighting Cancer Every Mile) and thanked them for what they were doing. They were both cancer survivors. The entire group turned around and engaged with the couple, listened to their stories, then asked their names and said they would be riding for them too. I was so touched by their sweetness. 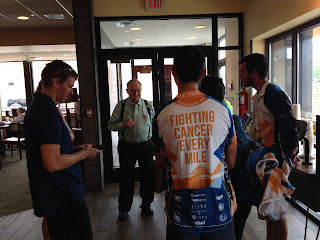 From there we went to the St. Louis Zoo. It was so crowded that we dropped them off. Paige and I parked near the Art Museum and waited for their call. It was nice getting to know Paige as we admired the view. 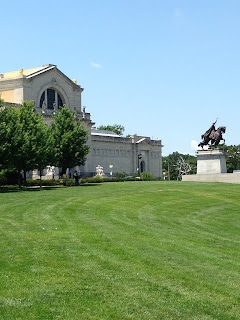 Paige received a call – half the group wanted to go have lunch, the other half wanted to continue at the zoo. She took her group to Adrianna’s on The Hill. I waited, snapped a few photos, then did some research on Texas 4000. Wow, why didn’t I do this before? I listened to the videos of Alex, Zoe, and Abigail. (Later I listened to the others.) Talk about impressive. I was hooked and knew I’d be following the group to Anchorage. Not in my car, just online.

While at the zoo, someone lost their phone, but it was turned in at the Lost and Found, at the opposite entrance of where I was to pick them up.

“Can you pick us up at the South entrance?”
“Sure, if I can find it. I am directionally challenged.” I hung up and called my husband. “Where’s the South entrance of the zoo?”
“Where we always go in at.”
Hmmm, I thought the North entrance was where we went in at. Since we were running behind to get them to their appointment, I called them apologizing and asked if they could just go to the North entrance. Boy did I feel like a dope. But in no time, they piled in the car and off we headed to Cardinal Glennon Hospital.

They presented gifts (for the children/patients at the hospital) to Meredith, who gave us a tour. I was quite impressed and learned so much about a great hospital in my hometown. 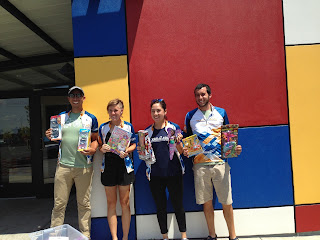 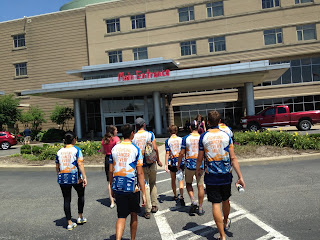 After the tour, we were off to Ted Drewes for St. Louis’ famous custard—they totally enjoyed it. 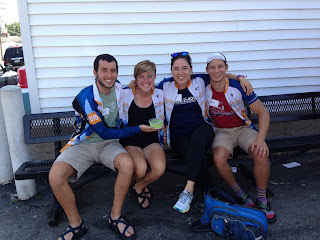 They heard toasted ravioli was another St. Louis thing and wondered whether time would allow them to go to The Hill to try it—and off we went to Guido’s.

I told them I wished I had been thinking to bake them a Gooey Butter Cake—another St. Louis thing.

“Can we get it somewhere?”

“There is one place that I hear makes a pretty good one ‘Gooey Louie’ however, homemade is the way to go. Ugh, don’t ever buy it in the store.” If anyone is reading this and wants to try it out for themselves—you know, bake it for your own friends and family, go to my dessert blog: Lynn, What's for Dessert?

Tina called to thank me for volunteering. I thanked her and told her I’d be happy to do it again next year. I told her how sweet the group of students I had were and how after we left Cardinal Glennon, Alex asked if there was someone I’d like them to ride for.
“Um, actually, my mom. She died of breast cancer when I was 12.”
“What’s her name?”
“Vera.”
“Can you tell me a little something about her?”
I was stumped because no one really asked me that question before. I had to think, what is she like? How do I describe her? She was a homemaker. She sewed, cooked, etc., but instead I blurted out about my watermelon story. Tina attended the fundraiser event that evening and told me how each one shared a little story and that ‘Lynn and her mom about the watermelon was mentioned.’
“Awww, how sweet.” A lump in my throat formed and I choked back tears.

I think about what an incredible journey these young folks are taking—the growth they’ll experience, and what an awesome adventure in helping such a cause. I overheard them always thanking everyone they came into contact with. They thanked me for driving them every time they got into the car. Observing them gave me hope for the future. I’d like to end by thanking them.

They actually asked if they could have a picture with me when I dropped them off at the school. I was so touched. 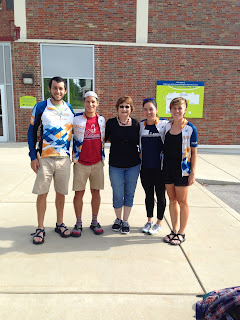 I crawled out of bed this morning around 8:00 and the first thing I thought about was the Texas 4000 group already cycling on the road for an hour. They were headed to the St. Louis Arch and then on their 100 mile trek for the day. I hope the Arch inspired them as they continue on.

As I mentioned, I’m hooked and will be following this awesome group through the rest of their journey, helping a bit financially… wishing them safety and sending love. Perhaps y’all might want to do the same.

Here are links to "my" group (although I never had Dan and Tuan in my car):
Zoe
Abigail
Alex
Joey
Blake
Dan
Tuan

And here is the Ozark route. And the entire 72 Ozark riders.

These students are so incredibly grateful to anyone and everyone who supports them even in the tiniest way... if there's anything you can do to help, they'd love it.

Turtles and Cardinals and Deer, Oh My!

I love where I live. It’s a bit of a haven for the few remaining wildlife.

Hubby, coming home from his work, spotted this on our driveway. He picked him up and brought him in so I could see him. We then let him loose in the backyard to mingle with the other creatures. Isn’t he a beaut? 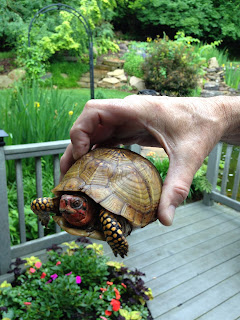 We have a big picture window on either side of the area in the one part of the house—they mirror one another, so I imagine if you’re a bird, you’d think you could fly on through. BOINK. We’ll hear this loud thud on the glass. Sometimes we’ll look and the poor fella will be knocked out silly—still alive. We do what we can to restore them to health. I usually sing HU and that does the trick. The are stunned to the point of letting us help. Just like this sweetie… 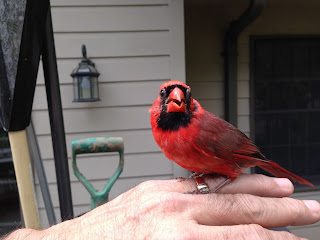 I’m always excited to see new borns. And this little fawn frolicks with its mother every day. Some people I hear get aggravated that deer eat their garden, and I get it. I’d rather admire the deer than admire my hosta. That is evident when you see my garden.

One day I spotted the little fawn by herself. No momma. She planted her tiny body on the rocks near the pond—foliage hid her, but since I watched her go there, I kept my eye on her waiting for her to get up. I had things to do and left. Later, I observed she was still there. I had hoped nothing happened to momma as deer are always getting hit by cars around here. Then I decided momma was training her little one. “Go and hide and I’ll find you.” or “See if you can make it on your own today, but don’t go too far.” Now how could you want to see a pretty hosta over this lovely creature? 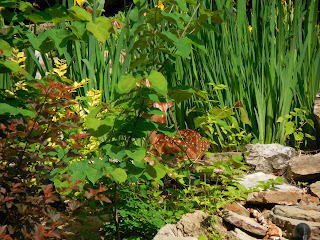 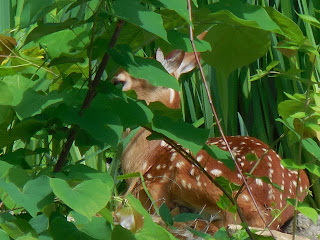 Another day, I was in my car going down the drive and I saw something waddling down the driveway. It was hurrying as it heard my vehicle. I finally figured it was a wild turkey, but by the time I got out my phone to snap a picture, he was well hidden in the woods. 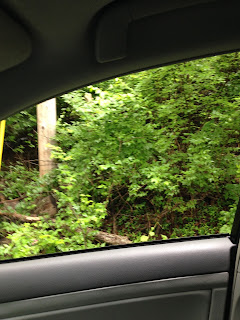