Friday night I went with my older sister to see Classical Mystery Tour: A Tribute to The Beatles. The concert was at Powell Hall/St.Louis Symphony.

Mom, did you know I was a Beatles fan? I was too young to be one of the crazed screaming girls, but I found out during the performance that Suzanne belted out screams when she saw The Beatles on the Ed Sullivan Show. Hmmm, can't picture her screaming like a maniac over four hunky guys... you know, back in the day it was a little out there... for her.

Back to The Beatles.

Martin Herman started the show conducting a full orchestra that played short arrangements of many Beatles’ songs. One flowed right into the other.

Then the four pretend Beatles -  Jim Owen (John Lennon), Graham Alexander (Paul McCartney), John Brosnan (George Harrison), and Chris Camilleri (Ringo Starr) walked on stage. I thought I was seeing and hearing The Beatles... down to the mannerisms and accents. Pinch me. I waited for screams.

I couldn't help but remember my own Beatles’ story.

They all giggled. “We can’t tell you.”

A single parent and pretty much living at poverty level, money wasn’t something I doled out. Especially not knowing what they might be spending it on.

But this was all the more reason for me not to hand over the dough.

“Pleeeease.” All three anxious faces staring at me.

“Okay.” I sighed, rolled my eyes, and handed over the precious bills, wondering what kind of junk I'd end up with.

“You can’t look!” What am I supposed to do, walk around the store with a blindfold? Somehow they pulled it off and seriously, I had no idea what they purchased.

On that Mother’s Day, Casey, Jessica and Rita huddled together and giggled as I opened my present... a poster of The Beatles. This poster... 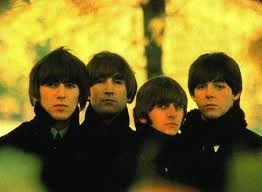 You would’ve thought The Beatles were their favorite. They jumped around like goofballs.

I had the poster framed. It hangs on the wall in my creative space. My heart skips a beat every time I look at it—and not because of The Beatles—it’s those three little stinkers I think about, their excited faces, and how they surprised me.

Listening to the pretend Beatles, I was blown away. But not near as much on the day I opened that Beatles poster.

I feel quite blessed as I have been honored again with blog awards.

I'd like to thank Jess at Praise, Prayers, and Observations for The Liebster Blog Award. I met Jess when I was doing the Letter Writing Challenge. We've become pen-pals and have so much in common, you'd think we're twins.

Here are the official rules for Liebster Blog Award: 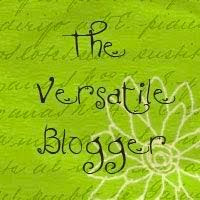 I'd like to thank Monique at Bends in the Road for The Versatile Blogger Award. I met Monique when I took the April Platform Challenge.  I admire Monique for her courage in moving forward even when dealing with health issues.

Here are the "official rules" for The Versatile Blogger Award:
Since I've been awarded before (you can read my first Versatile, second Versatile, third Versatile and the first Liebster awards) it's going to be a challenge to come up with something interesting, but I'll give it a shot.

In my first nomination I used the theme of music, the second I used body parts, the third I followed what the blogger who awarded me the award by what she talked about. So this time, I shall make the theme about food. Here's my seven random things...
Now, I'm changing things a tad as far as how many folks I'll be nominating, and I'm going to give  both the Liebster Award and The Versatile Blogger Award to the same folks... those being the last five peeps who decided to follow my blog. Some have been awarded one or both of the awards before, so play if you want, but it still would be interesting to hear 7 more interesting facts about all of you.

***
Connect with me on Twitter, Facebook, and LinkedIn. Sign up for free email updates from this blog in the top right-hand corner of the page.
Posted by Lynn at 4:00 AM 13 comments:

I guess it takes some pets longer than ten days to get acquainted and become friends. Even though Smeagol had more tolerance at the end of Wee’s stay (see Friend or Foe? blog to understand), Smeagol still didn’t want to play or have much to do with Wee, but they got physically closer. 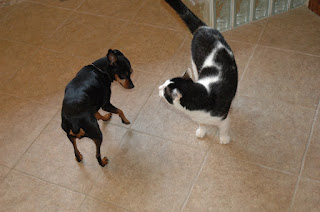 Smeagol and Wee had cream together. 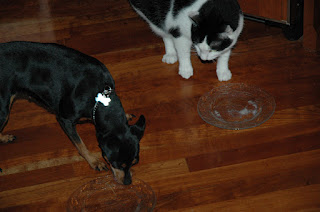 Smeagol let Wee eat his food, although he was on the window sill whining about it. 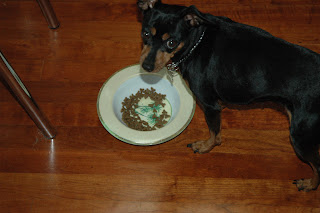 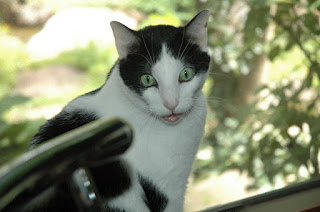 They sniffed each other. Smeagol always sat at the screen door wondering why Wee went outside and not him. One night they both slept a foot away from each other and that was more than I could have hoped for.

I remember when I was little and we’d go to someone’s house that we’d only visit once a year. If they had kids we’d all be thrown together and stand there awkward. Or if we could get away with it, we’d hang onto your side for as long as possible before that became annoying to you and you’d say, “Go play.”

Depending on where we were at and who we had to play with would depend on how quickly we’d gel and play like mad. When it was time to go home, we’d whine, “Do we have to go now?” Then there were the times where you thought you had been at place for a weekend, it’d drag on and you couldn’t wait to go home. It seems like those times were fewer, but still…

I imagine that’s what it was like for Smeagol, only for Smeagol it was, when is this thing they call Wee going home? The day Wee left, Smeagol kneaded my belly, purred his little heart out, curled up and fell asleep on my lap. I guess it was his way of saying, “Thank you.”

My stepson, Todd and his new bride, Sam left on their honeymoon to Hawaii. They have four dogs and two cats and needed babysitters. They divvied them out to anyone they could find. We were lucky to get Wee, a miniature Pincer. 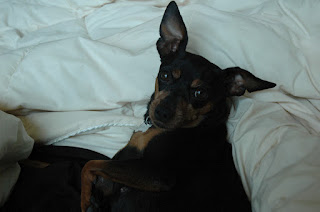 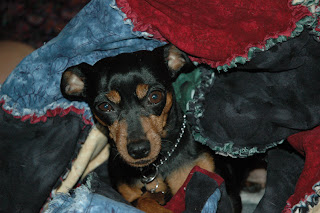 I asked Todd if Wee’s ever been away from home and he said no. I was thinking, oh great, I’m going to be having a lovely time. Add that to the fact that our Smeagol is a big scaredy cat when it comes to dogs. I was pretty sure I’d be pulling my hair out.

Wee has to be the best behaved and the sweetest dog I’ve come across. We instantly bonded and she hasn’t left my side since she’s been here. Smeagol is no where to be seen, although he occasional comes around meowing a pitiful sound as if he’s heart broken. He wants to let me know he’s unhappy. I talk to Smeagol letting him know Wee is just temporary and that Wee wants to be friends. Wee gets so excited she runs up to Smeagol causing him to tear off running. Wee is actually smaller than Smeagol. 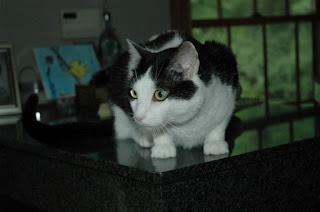 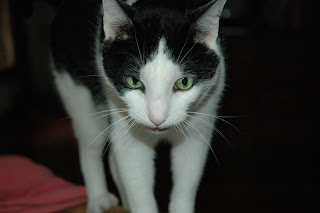 Smeagol sits on my lap in the morning while I contemplate and write. One morning Wee was in Smeagol’s spot. Smeagol got as close as he could without being on my lap. But as soon as Wee tried to give Smeagol a little sniff, Smeagol hissed and ran away. It was progress.

As I write this, we are in day three of the ten days I’ll have Wee. I’ll post an update the next week and let you know if the two ever became friends. It’s all on Smeagol’s terms—but isn’t that they way of cats? Can you see that Mr. Smeag isn't all that happy with Wee? 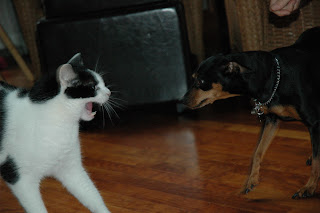