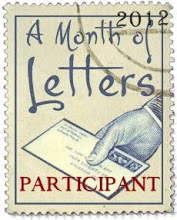 Giving me a grand total of 74. Not bad since the challenge was to send out one thing a day, which would be about 28, although it's less than that because they don't count Sundays.

Did you know I love writing letters? And hand-written to boot. You can check out my web on The Lost Art of Letter Writing at lynnobermoeller.com

You've got six months to gear up for 2014 Letter Writing Challenge! Mary Robinette Kowal created this idea, so check it out.
Posted by Lynn at 5:00 AM